Our driver will meet you at your Hotel Or Riad in Fes City and start travelling to Sahara desert Tour of Morocco through a beautiful berber villages Stoping in a nice city Ifran Situated in the mountains of the Middle Atlas Ifrane is an oasis of freshness and greenery. Lakes fountains the scenery is total surprising and refreshing. (Known as Moroccan Switzerland)Our trip takes us alongside the trailing edge of the Cedar Forest where you may well sight Barbarian apes to midelt via Azrou -Your journey continues to erg chebbi via a magical ziz gorge you have opportunity to take a nice photos. Then we ahead to Erfoud city and Oasis Tafilalet where there is an old Souk. On the afternoon you will mount your camel guided by an experienced camel man to explore within the sand-sea of Merzouga. Dinner will be served in front of the Berebr tent Camp where you will spend the night 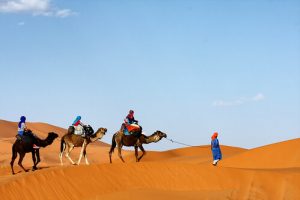 Depart after breakfast to start the journey to Ait Ben hadou Kasbah, which belonged to the Glaoui family, the Pashas of Marrakesh, it’s the most famous Kasbah in Morocco and a UNESCO World Heritage site. It is also well-known as being the backdrop to many Hollywood blockbusters, The last part of the day’s journey is across the hight Atas Mountains and its spectacular Jurassic geography. There will be a lunch stop and time for photographs on the way. We reach Marrakesh at the end of the afternoon.

he fee includes the following for the whole tour:

Where appropriate, the fee also includes:

During the tour you will need to pay for: